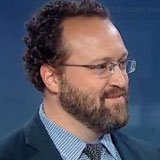 Working closely with officials in Ottawa, Washington and Mexico City during the 2017-19 NAFTA renegotiations, he led the effort to secure an unexpected and unprecedented increase in Regional Value Content for Canadian automotive suppliers in the new USMCA, worth $6-8B in annual incremental volumes for their Canadian operations alone. In 2021, he was named one of the Top 50 People Influencing Canadian Foreign Policy by The Hill Times.

When the global COVID19 pandemic created a dangerous medical equipment shortage in Canada in early 2020, he launched one of the biggest peace-time mobilizations of the country’s industrial capacity in its history. Dubbed a ‘manufacturing hero’ by the Toronto Star for his leadership, this effort resulted in the largest build-orders of ventilators, face shields, surgical masks and gowns in Canada’s history.

A passionate technology leader, his response to the Prime Minister’s call to action for a net-zero emission economy by 2050 was to launch an all-Canadian, zero-emissions, lightweight, concept vehicle to debut in 2022. Described by the Globe and Mail as ‘an audacious play to build an all-Canadian electric car’, APMA’s Project Arrow was revealed at CES2020 in Las Vegas to international coverage and will serve as a premier showcase of Canada’s automotive technology cluster.

Flavio speaks regularly on behalf of industry interests and is a sought-after voice by leading global publications including The Economist, New York Times, Bloomberg, Wall Street Journal, CNN, BBC, CNBC, Globe and Mail and Washington Post. He was recognized as a top Industry Leader in the 2017, 2018, 2019 and 2020 editions of Automotive News Canada’s All-Stars.

Previous to APMA he served as Managing Director, Canada of WIRSOL AG, the EU’s largest privately-held solar photovoltaic energy developer, and as Chief of Staff to the Ontario Minister of Economic Development and Trade.

Flavio holds a Master’s in Business Administration from the Schulich School of Business at York University and a Bachelor’s degree in International Relations from the University of Toronto.